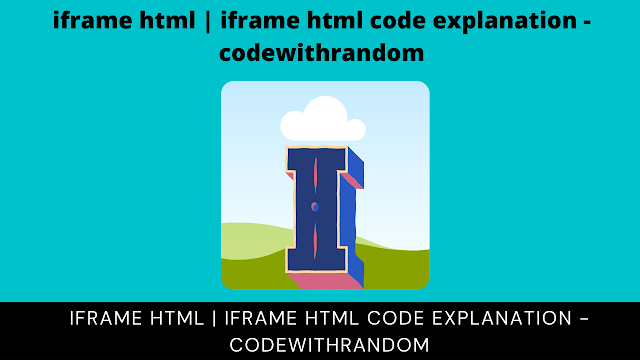 An iframe also called an inline frame is an HTML element that is used to display the external content including other webpages within our main webpage. In other words, an iframe works like a mini web browser within a web browser. Furthermore, the content contained within an iframe is totally independent of the items around it.

The src attribute takes the location of an external object or a web page as its value.

While adding an <iframe> element it is always best to assign a height and width to the iframe window. For example:

Or you can use CSS

Similarities between <frame> and <iframe> elements

Both <frame> and <iframe> elements creates a standalone HTML document. The document’s content is referenced in each element’s src property, thus it’s a completely independent resource being referenced from the current document.

Difference between <frame> and <iframe> elements

The key difference between <iframe> and <frame> is the way they distribute the mini web window on the page.

The <iframe> tag creates a mini web window in a way that makes sense and respects the nature of an HTML document and browser window. It creates a mini window, such that its content is displayed in an element that is a part of the current document.

Whereas, the <frame> element disrupts this structure. It allows the document to take control of the browser window by dividing it into multiple smaller panels (frames). Where each frame displays a distinct document. All the other differences between <frames> and <iframes> arise from this fundamental difference.

Here are a few of the best cases, where you should use iframe or inline frame.

Here are a few worst uses of iframes:

A good rule of thumb is to only use iframe when you want to embed some independent, pre-existing HTML document into the current document. However, if you are creating all of it from scratch, in that case breaking your page layout into several independent documents is not worth doing. Especially if they are not a real fragment of independent content.

The iframe element is supported in the following browsers and higher: