Difference between let and var keyword in javascript – codewithrandom 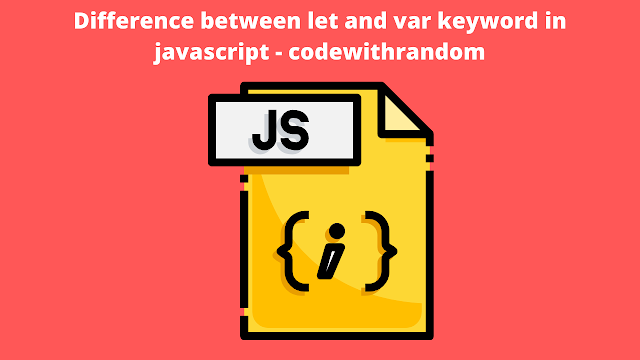 If you’re a beginner in this field, then follow me because I’m going to explain it from scratch.

So, Let and Var are keywords in Javascript with the help of we declare variables. Before moving ahead let’s discuss what is variable for a short introduction to make the topic more clear for beginners. I know most of you have heard this name earlier. If you haven’t, so don’t worry we’ll cover it up here.

Variables are containers for storing data (values). In data, it can be number, name, boolean, string, object, etc.

In this below example, p, quantity, name, response are declared with the var keyword:

From the above example, you can expect:

So by this what we are getting is that each variable is acting as a container that what I have mentioned in the definition.

In JavaScript, there is three-way to declare variables.

Note:-  We have another article for Global and Local scope.

Variable declared using the var keyword followed by the name of the variable and semi-colon. Below is the syntax to create variables in JavaScript:

After the declaration, if we don’t assign any value or data to the variable then (technically it carries the value of undefined).

If you will run it then it prints the undefined value on the console.

To assign a value to the variable, we use the equal sign this is common in other programming languages:

Let’s have a look glimpse of var.

If you re-declare a JavaScript variable, it will not lose its value.

Var as a Local variable.

Local variables are variables that are defined within functions. They have local scope, which means that they can only be used within the functions that define them.

The above example illustrates the use of a local variable. However, that a statement outside of the function can’t refer to the variable named routeName. So, it is showing an error of undefined it is so because it has local scope.

Var as a Global variable and Scope.

In contrast, global variables are variables that are defined outside of functions. These variables have global scope, so they can be used by any function.

Let is a keyword used to declare variables in javascript that is block-level scoped. Let is introduce in ES6(2015). The purpose of introducing let is to resolve all issues posed by variables scope, which developers face during development. The properties of let are that They have visibility linked to the block they belong with. We can change their values, but they cannot be redeclared in the same scope, unlike var.

Before ES6 (2015), JavaScript had only Global Scope and Function Scope. As I have mentioned that ES6 introduced two important new JavaScript: let and const. These keywords provide Block Scope in JavaScript.
Variable declare inside a {} block is termed as in block-level scope and it can’t be accessed from outside the block.

How to make a QR Code generator using JavaScript ?