What is a Web Developer? easy explanation – codewithrandom 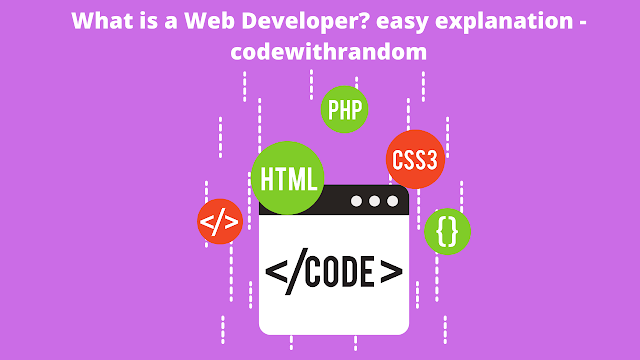 Who is a web developer?

A web developer is a person who takes a web design created by the client, uses his programming skills, and converts that design to the website.

There are three types of web developers. They are

Web developers who are responsible for the parts of a website to which people will see and interact are called Front-end developers. Front-end developers deal with the client side. They use languages like HTML, CSS, and JavaScript to structure, style and add functionalities to the website respectively. They make sure that the website looks appealing to the viewers by using the right colors and actions which fit the brands.

Back-end developers deal with the server-side. They create programs that handle the website’s server, databases, and other applications of the website. They use a wide range of programming languages and the most popular are Python, PHP, Ruby, JavaScript. SQL, MongoDB, etc is used to manage the data on the website.

By now you would have got an idea about A Full stack developer! So, let’s see whether your guess is right or not.

If you are choosing Web development as your career then it’s a great choice All the very best for your future👍. If you have any queries then comment down them in the comment section below😊

Thank you for reading!

How to Create Instagram Logo Using HTML And CSS