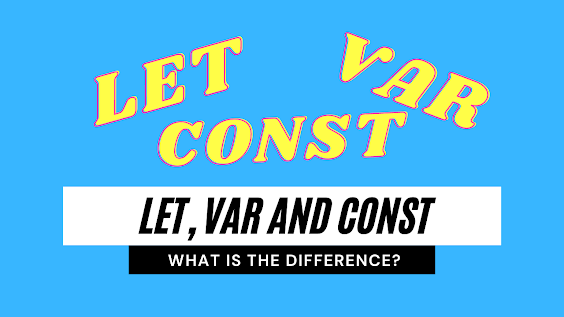 Difference Between Let and Var and Const in JavaScript

Let and Var and Const

In 2015, an update to JavaScript was introduced to bring the term called let. However, before that var was used commonly. Var actually means variable.

Var is used as a globally scoped variable when it needs to be declared outside of a function and is scoped when it’s declared in a function.

We’ll get an error because the variable world is outside of the function.

Let came in the 2015 ES6 JavaScript update. Let is preferred for variable declaration. Let is also better than var. Let’s learn about let.

Let is block scoped. This means let is only allowed to use within one block. A block is known as a piece of code in the curly bracket symbol { }.

In this case, since the world is outside its block, it returns an error. This is because let variables are block scoped as mentioned earlier.

Const exists for quite some time too. Const actually stands for constant. Const shares some similarities with let anyhow. Const declarations are also block-scoped like let. However, let can be updated but const can’t be updated too.

For example, in let we can do:

But in const, we can’t do that too. Thus, every const declaration must be done at the time of declaration itself.

And that’s all the differences between let, var, and const!

Thanks for reading! Do contact me via the comments and methods below if you have to say anything: