what is JSON? | what is XML? | WHY JSON IS BETTER THAN XML 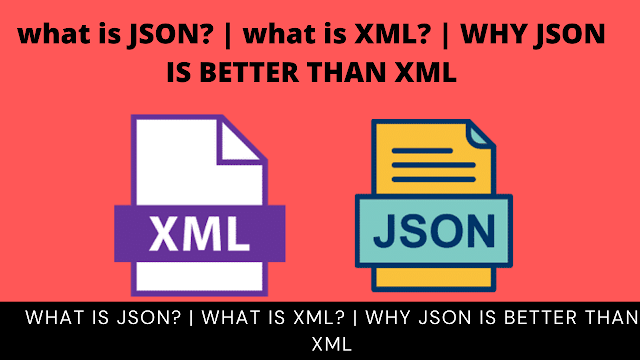 Javascript Object Notation is an easy format for storing and transporting data. It is easy for humans to write and read.
It is used when data is sent from a server to a website. It is generated from Javascript, but most of the programming languages include code to generate and parse JSON format data.
JSON is a string with a specified data format it contains only properties, not methods.

what is XML?what is xml file

Extensible Markup Language XML is a markup language like HTML. It is a markup language that defines a group of rules of encoding documents in a format that is understandable by humans and machines.
It is also used to receive data from a web server. It is not a replacement for HTML. XML is allowed to carry data, not to show data. XML tags are not already defined. You must define your own tags. It is platform and language independent.
The main thing that makes XML so powerful is its international acceptance.

Let’s discuss Why JSON is Better than XML

JSON is faster and better than XML because it is designed specifically for data interchange. JSON encoding is terse, which requires inferior bytes for conveyance.
JSON parsers are very less complex which requires very less processing time and memory space.
XML is slower because it is designed only for just data interchange. XML is much more difficult to parse than JSON. It is used more words than necessary.
JSON object has a type whereas XML data type is less.
It’s some reason’s why JSON is better than XML I hope this is helpful for you.